Abstract | The H9N2 subtype avian influenza virus (H9N2 AIV), which has been in circulation for two decades, has become the predominant subtype in China, attracting considerable attention due to human infections and the contribution of internal genes to H5N1 and H7N9 influenza viruses. Multiple H9N2 AIV genotypes have been identified from various species, including birds and mammals. H9N2 AIVs could spread through water, air, and live bird markets. Since the first isolate from 1994 in China, H9N2 AIVs have been prevalent over 20 areas of China, especially in South China, such as Guangdong, Guangxi, and Fujian provinces. Vaccination is the predominant strategy to prevent and control H9N2 AIVs. There are three inactivated vaccines of H9N2 AIVs have been used in domestic poultry in China. But H9N2 AIVs occurred frequently and caused severe economic losses to the poultry industries. H9N2 AIVs can evade the pressure of vaccination by genetic evolution and antigen variation. Moreover, the ratio of L226 in the haemagglutin (HA) receptor binding site has increased, which indicates that the H9N2 virus has the increasing potential to infection and cause human epidemics. The threat to the poultry industry and public health should not be ignored. In this review, we summarised the findings of recent studies on H9N2 AIVs epidemics and strategies for their prevention in poultry in China.

Influenza A viruses can be divided into different subtypes based on the hemagglutinin (HA) and neuraminidase (NA) glycoproteins. Along with the H18N11 subtype influenza virus identified in bats, eighteen HA (H1–H18) and eleven NA (N1–N11) subtypes of influenza A viruses have been identified (Tong et al., 2013). However, the H5N1 and H9N2 avian influenza viruses (AIV) are the predominant subtypes circulating in poultry around the world. Such infections have caused severe economic losses in the poultry industry and represent a threat to public health (Butt et al., 2005a; Chen, 2009). The H9N2 subtype avian influenza virus (H9N2 AIV) has been circulating for two decades in China and has attracted considerable attention due the contribution of internal genes to the highly pathogenic avian influenza (HPAI) H5N1 virus in Hong Kong in 1997 and the novel H7N9 influenza virus in mainland China in 2013 (Gao et al., 2013; Lin et al., 2000). There are many reports about the H9N2 AIV reassortant with other subtypes, such as H5N1, H7N9, H10N8, H5N3, H3N8, H4N3, H4N6, H7N7, H10N4, and H14N5 viruses (Chen et al., 2014; Dong et al., 2011; Gao et al., 2013; Monne et al., 2013). The novel reasortant subtypes such as H5N2, and H7N9 have emerged and threaten public health and domestic poultry (Gao et al., 2013; Mi et al., 2013; Zhao et al., 2012). Therefore, the H9N2 subtype avian influenza viruses have been classified as candidate viruses with pandemic potential. Multiple strategies should be implemented for the prevention and control of the circulation of H9N2 AIVs in China. Here, we reviewed the epidemiology, pathogenicity, and strategies for the prevention and control of the H9N2 AIVs.

H9N2 AIVs could spread through water, air, and live bird markets. In China, the geographical distribution of H9N2 AIVs was shown in Figure 1. Clearly four provinces, such as Guangdong, Anhui, Henan and Shandong provinces were predominantly prevalent area, in which there were over 170 HA gene sequences of H9N2 available in NCBI Influenza Virus Resource Database (http://www.ncbi.nlm.nih.gov/genomes/FLU/FLU.html) until to 11th June 2014. Dong et al. summarised the distribution of H9N2 influenza viruses in different hosts and regions from 1966 to 2009, showing a wide distribution and multiple hosts of H9N2 influenza viruses in China (Dong et al., 2011). We analysed the numbers of H9N2 AIVs distributed in different hosts and periods in China between 2010 and 2013 according to the haemagglutinin (HA) sequences of H9N2 AIV published in the NCBI Influenza Virus Resource Database until to 11th June, 2014(Table 1). The results suggest that H9N2 AIVs continue to circulate in China, but in recent years has mainly affected chickens, ducks and wild waterfowl (Table 1), which are the most important reservoir of AIV (Chen et al., 2004; Fouchier et al., 2005). Water as an important factor play a key role in the spread of AIV (Zhang et al., 2014). Migration of waterfowl also increases the spread of AIV to other regions, thus representing an even greater challenge to the control of avian influenza in China (Chen, 2009). Recently, 22 H9N2 AIVs were isolated from wild waterfowl in Dongting Lake in China from 2011 to 2012 (Zhu et al., 2014). Large populations of waterfowl are bred in southern China because of abundant water area, most in backyards or small scale farms (Chen, 2009). Waterfowl AIVs can be transferred to other domestic animals, such as chickens and pigs, when contact is made with waterfowl (Chen, 2009). 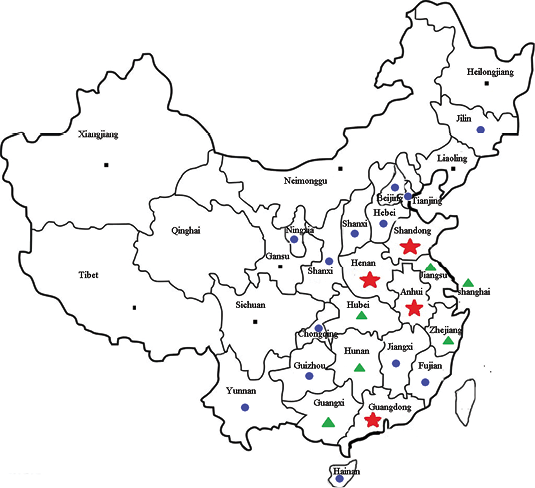 Influenza virus commonly spreads around the world in seasonal epidemics. Previous studies have shown high prevalence of H9N2 AIVs in winter and spring rather than in summer in chicken farms (Chen et al., 2012; Xu et al., 2007; Zhao et al., 2013). However, the rate of H9N2 isolation has no relationship with the season in live poultry markets and the infection rate in healthy chicken flocks is unknown (Ge et al., 2009).

Generally, H9N2 AIVs are non-pathogenic to chickens under experimental conditions (Choi et al., 2004; Guo et al., 2000; Li et al., 2005; Zhang et al., 2008). However, poultry in the field infected with H9N2 subtype AIVs caused mild-to-moderate respiratory disease, high morbidity, and reduced egg production when co-infected with other viruses or bacteria such as infectious bronchitis virus, Escherichia coli and Mycoplasma gallisepticum (Nili and Asasi, 2002; Zhang et al., 2008). In contrast to chickens, H9N2 AIV shows different pathogenicity in mice. G9 (A/chicken/Hongkong/G9/97) and G1 (A/Quail/HongKong/G1/1997) viruses have been shown to replicate systemically and to be lethal in mice (Choi et al., 2004; Guo et al., 2000). However, another study demonstrated that the G9- and G1-like H9N2 AIVs replicate only in the respiratory system of mice and were not lethal (Lu et al., 2001). Previous studies showed that H9N2 AIVs isolated in mainland China exhibited diverse replication phenotypes in mice without prior adaptation (Li et al., 2005; Lin et al., 2014). H9N2 AIV was also shown to adapt well in mice after serial passage in mouse lung and was highly pathogenic in mice (Liu et al., 2014), which indicated that H9N2 AIVs are a potential threat to public health following adaptation to humans and other mammals (Liu et al., 2014). So the pathogencity of H9N2 AIVs need to be paid close attention in China.

Table 1. Distribution of H9N2 influenza viruses in different hosts in China from 2010 to 3013.

Figure 2. Phylogenetic relationships of the H9N2 AIV HA genes in China during 2013 to 2014. The red strain indicates H9N2 AIV belonging to lineage h9.4.2.5. The tree was constructed using the neighbour-joining method with MEGA5.05 (www.megasoftware.net/) and 1,000 bootstrap replicates

showed that all the viruses are belong to lineage h9.4.2.5 (Figure 2), but no lineage h9.4.2.6 was found. These results illustrate the complexity of the prevalence of H9N2 AIVs in China, the underlying mechanism of which merits further investigation.

Prevention and Control of H9N2 AIVs

Vaccination is an effective and economical strategy for the prevention and control of influenza viruses. Three viruses (A/chicken/Guangdong/SS/1994, A/chicken/Shandong/6/1996, and A/chicken/Shanghai/F/98), belonging to the Ck/Bei/94-like subtlineage, have been used commercially to produce inactivated vaccines in China. These vaccines have been used to prevent H9N2 AIV infections in chickens since the late 1990s. But the antiserum induced by these vaccines did not react efficiently with the prevalent H9N2 AIVs. Huge numbers of H9N2 AIVs evaded the protection of these vaccines, which resulted in the wide prevalence of H9N2 AIVs in China (Jiang et al., 2012; Li et al., 2005; Xue et al., 2014). In order to reduce the prevalence of H9N2 AIVs, the vaccines should be updated based on surveillance data and the local epidemic virus. Moreover, antigen mapping can be used to monitor the antigenic differences among vaccines and circulating strains and predict the effects of vaccination (Smith et al., 2004). In addition, it is important that the selected viruses are compatible with the embryonated chickens’ egg culture technique for the production of high levels of antigen.

Although large-scale phylogenetic analyses have been conducted to determine the genetic evolution of H9N2 AIVs, the mechanism by which a genotype or gene contributes to the prevalence of H9N2 AIVs and the function of the H9N2 internal genes in other subtypes need to be further clarified. Compared to the H5N1 virus vaccine, the pre-clinical and clinical research into H9N2 AIVs is lagging far behind in China. Until a more effective vaccine is developed to control epidemics, the H9N2 AIV will continue to circulate in multiple poultry populations. Therefore, long-term surveillance and the implementation of control strategies should be continued in domestic poultry colonies and LBMs in China. Furthermore, further studies should be conducted to predict potential H9N2 AIV epidemics in humans.