Polyphagous pest, Helicoverpa armigera is a major detrimental factor of gram affecting both quality and quantity of the produce in Thal regions of Punjab. Therefore, experiment was conducted to check the efficacy and feasibility of five IPM tools viz. Pheromone traps, Light traps, Trichogramma chilonis, Bacillus thuringiensis, T-shaped bird perches and Handpicking. Results showed the cumulative effects of all IPM components having 4.81, 4.96, 6.22 % foliage, pod and grain damage, 0.71 larva/plant with 32.28 % yield increase over control treatment. But Marginal Cost Benefit Ratio was -0.46. Light traps proved more efficient and feasible having low environmental risks having minimum percent foliage, pod and gain damage of 2.09, 0.71 and 0.29, respectively with 0.13 larval population/plant, maximum yield of 875 kg/ha with 68.84 % yield increase over control under current investigations. Light traps had ideal MCBR of 13.3 with net income Rs. 32000 followed by B. thuringiensis and hand picking having net income Rs. 11150 and 10300, respectively. T. chilonis and T-bird perches were least effective having net income 3850 and 5075, MCBR 5.13 and 3.12, respectively. Light traps had maximum adult catches of 706/ cropping season, which reduces the larval population by suppressing the egg laying of adults. Maximum adult catches were recorded during the month of July with 9.36/night having positive and significant correlation with temperature.

Chickpea (Cicer arietinum) known as chana is important legume crop of South Asia. There are two different kinds of chickpea, kabuli and desi, based on shape, size and color of seeds. The crop is mostly sown under rainfed conditions. It is rich source of protein 24 %, carbohydrates 59.6 %, and minerals 3.2 % (Bakra et al., 2004). Globally chickpea is grown over an area of 13.54 million hectares with production of 13.10 million tons. India, Australia, Pakistan, Turkey and Myanmar are major chickpea producing countries (FAOSTAT, 2015). It has ability to tolerate high temperature by fixing atmospheric nitrogen (Cumming and Jenkins, 2011). However, the high yielding is limited by insect pests (Yogeeswarudu and Krishna, 2014). It is attacked by 57 different insect species among these Helicoverpa armigera (H) is very much important. It is highly polyphagous insect having a vast range of alternate host plants attacking on most of the horticultural, agricultural and ornamental crops (Sarwar, 2006; Patanker et al., 2001). Initially it feeds on fresh leaves and tender branches. It may leads to 30-40 % pod damage. Under favorable environmental conditions it may cause 80-90 % damage (Rehman, 1990; Sachan and Katti, 1994; Kassi et al., 2018; Javed et al., 2018). In northern thal areas of Pakistan 90 % pod damage has reported on unprotected chickpea fields. An outbreak of H. armigera was recorded during 2001-02 (Anonymous, 1987, 2002). A single female may lay up to 3000 eggs singly. Under agro-ecological zones of thal there are two activity periods of H. armigera i.e. 1st flush during November-December on fresh leaves and tender branches while 2nd flush during March-April on flowering and pods. It eats fresh seed inside the pods and cause significant losses to the crop yield. Due the increasing concern of environmental awareness of pesticide hazards has evoked worldwide interest searching alternatives of pest control. Therefore, it is necessary to adopt such pest control techniques which reduce insecticide application significantly. Various Integrated Pest Management (IPM) tools were used such as pheromone traps, light traps, Trichogramma chilonis, Bt toxin, bird perches and hand picking. These are important tool to control pest population. Pheromone and light traps are powerful attractants which mainly use to control and monitor lepidopterous pests (Malik and Ali, 2002; Dillon and MacKinnon, 2002). In Pakistan as well as rest of the world extensive studies were carried out to check the bioefficacy of T. chilonis and B. thuringiensis (Khalique and Ahmad, 2001). Bird perches encourage predator birds such as black drongo, house sparrow, blue jays, cattle egret etc (Gokhale and Ameta, 1991) to sit and eat live larvae. Therefore, current study was conducted to check the efficacy and feasibility of various IPM tools based on their Marginal cost benefit ratio under agro-ecological zones of Thal.

Experiment was conducted at Arid Zone Research Institute, Bhakkar to evaluate the efficacy and feasibility of various IPM tools i.e. pheromone traps, light traps, Trichogramma chilonis, B. thuringiensis, T-shaped bird perches and handpicking in gram crop under rain fed conditions during 2017-18. Each treatment consists of 1 hectare area, same variety (including both Desi and kabuli) and sowing date with control treatment.

Pheromone traps @ 15/ha with lures (Z -11-hexadecenal) were used 30 days after sowing till harvesting. Each trap was hanged with wooden stick 1 m above the ground with 35±3 m apart. A cotton swab soaked with 2 ml of insecticide Spinosad 240 SC was placed inside the trap for the purpose of killing. Adult catches were recorded on daily basis. Pheromone lures were replaced after every 15 days intervals.

Local made light traps @ 2/ha were installed 30 days before sowing till 30 days after harvesting. Trap was hanged 1.5 m above the ground. The light source was provided by alternate current with LED 24 watts from dawn to dusk. At the base of trap a poison bottle having potassium cyanide with a layer of plaster of parris was hanged for the killing purpose. Adult catches were recorded on daily basis.

Two applications of Bt toxin were made on vegetative and flowering stage @ 1 g/liter of water.

T-shaped bamboo sticks of 0.5 m long were installed @ 45/ha at vegetative stage till harvesting in order to encourage the local birds to sit and eat the larvae.

Only farmer based treatments were applied with no additional application of other treatments. 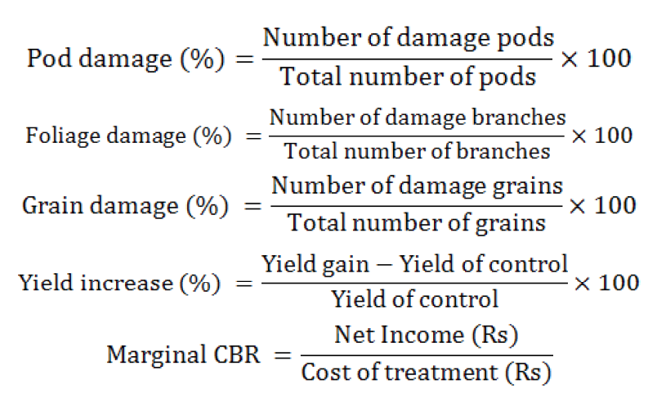 Cumulative impact of all IPM components had significantly decrease pod damage, grain damage and larval population but it is not feasible to use all these components as they have negative Marginal cost benefit ratio. Under agro-ecological zone of thal, light traps were best tool for monitoring as well as suppression of pod borer population. Under these conditions the light traps can be improvised as solar based traps to improve its efficacy. As high cost and availability of electricity is big problem for the adaptation of electric based light traps.

The authors declare there is no conflict of interest.