4Centre of Advanced Studies in Vaccinology and Biotechnology, University of Balochistan, Quetta, Pakistan

AA conceived and designed the study and collected the data. EE analysed the data statistically. YEE and MMT interpreted the data and wrote the article.

The presence and quality of the existing pasture land are important for cheaper and qualified small ruminant production. Provincial meadows and pastures in terms of current assets are of primary importance for eastern part of Turkey (Aksoy and Yavuz, 2012). The ovine sector in the region is mainly composed of low-yielding domestic races, largely based on land-based feeding conditions and a structure using limited inputs (Ertuğrul et al., 2010). With the increasing demand for sheep meat in Turkey, there was a need to study various aspects of the production chain, including costs and revenues of the system. Although there are numerous studies on the economic values for sheep meat in the world, it has not been studied enough in Turkey. Lôbo et al. (2011) estimated economic value for a sheep raised in pasture-based production system in semi-arid Brazil using data on the Morada Nova hair sheep breed. Bytyqi et al. (2015) studied economic values for production traits for different sheep breeds.

One of the most effective ways for covering the demand of the meat is lamb production. The ability of lamb to produce red meat is defined as live body weight and live weight gain and live body weight of lambs is noticeable in increasing profitability (Esenbuga and Dayioglu, 2002). In sheep production, growth-related quantitative traits i.e. weights at various periods (birth weight, weaning weight, weight at 6 months, yearling weight and weight at the end of the grazing period) are limited by genetic and non-genetic factors. However, the first live body weights of the lambs are the significant traits affecting growth, survivability and mortality of them. To preciously estimate genetic parameters and genetic improvement and to predict genetic merit of animals in relation to the more heritable quantitative traits in a flock, it is unescapable to reveal the influential non-genetic factors (Bytyq et al., 2015) with the use of robust statistical approaches viz. Classification and regression tree (CART), Chi-square automatic interaction detector (CHAID), artificial neural networks (ANNs), and multivariate adaptive regression splines (MARS) data mining algorithms. Mass selection suitable for more heritable traits is a selection method on being directly selected superior animals in quantitative traits with the scope of the genetic improvement.

Esenbuga and Dayioglu (2002) reported the data on the influence of non-genetic factors on growth characteristics of Awassi and Morkaraman sheep breeds. Petrovic’ et al. (2015) evaluated the effect of genetic and non-genetic factors on weights at various periods of the lambs belonging to Pirot × Württemberg and Sjenica × Württemberg crossbreds. High daily weight gains are desirable and crossbreeding systems are the most influential solution to improve the profitability of lamb meat production, to develop rural economy and to increase labour efficiency in farms in the event that there is lack of genetic variation in traits.

Morkaraman is a multifaceted indigenous sheep breed that has fat-tailed structure but has twin reproduction at lower proportion. The indigenous breed is also of great importance in the conservation of local gene sources in Turkey. Romanov is one of the most productive sheep breeds in reproductive efficiency, rapid growth and high survival rate. As from the year 2004 in Turkey, the fat-tailed sheep breeds have been crossbred with the Romanov prolific breed (Korkmaz and Emsen, 2016). As the indigenous breed, Morkaraman has high adaptability under harsh conditions and zoonotic diseases at regions where they live in Turkey. In obtaining higher survival rate, it is logical to evaluate growth and reproductive performances of Romanov x Morkaraman F1 crossbred (Korkmaz and Emsen, 2016). Isik and Kaya (2011) studied weights at the start and end of grazing period for Tuj lambs. There is still lack of describing factors affecting pasture revenue in Morkaraman and the crossbred sheep, which is significant in developing rural economy. Hence, this study was conducted on Morkaraman breed and Romanov x Morkaraman F1 Crossbreed sheep in order to find factors affecting pasture revenue with the aid of MARS data mining algorithm as a non-parametric regression method.

The present study was performed on indigenous Morkaraman breed and Romanov × Morkaraman F1 Crossbreed sheep maintained at Research and Application Farm of Atatürk University, Erzurum province of Turkey. The data were recorded on the dam age, genotype, birth weight, year, sex and birth type at lambing, weaning weight, weaning age, grazing period and weight at the end of the grazing period on pasture revenue, of great economic importance, which is defined as the obtained revenue per lamb from weaning period to the end of the grazing period. The collected data are crucial for efficient breeding strategies.

MARS data mining algorithm was suggested by Friedman (1991) with the intention of describing the non-linear relationships between a set of predictors and responses. Within the scope of the MARS algorithm, no assumptions about functional relationships between responses and predictors are needed. It is a nonparametric regression technique based on a divide-and -conquer strategy where the training data sets are split into separate piecewise linear segments (splines) of various gradients (slope). The splines are connected smoothly to each other as well as basis functions as piecewise curves permit ones to adaptably construct linear and non-linear effects. The connection point between the pieces is called as “knots”. The candidate knots were placed at random location within the range of each predictor. MARS generates basis functions by taking into consideration all potential candidate knots and interaction effects between predictors in a stepwise procedure. To define a pair of the basis functions, the forward procedure sets up the candidate knots at random location within the range of each predictor. The predictive model built by MARS data mining algorithm at each stage specifies the knots and their pairs of basis functions to decrease error variance. Until the complicated model is achieved, the procedure of involving the basis functions continues. The redundant functions insignificantly contributing to the MARS are deleted by the backward procedure in the MARS (Zhang and Goh, 2016).

Where, Ŷ is the predicted value of the response variable, β0 is a constant, hkm(Xv(k,m)) is the basis function, in which v(k,m) is an index of the predictor employed in the mth component of the kth product and Km is the parameter limiting the order of interaction (Ertürk et al., 2018).

The maximum number of basis functions in the current analysis was 200 and no interaction effects were used for MARS. After building the most complex MARS model, the basis functions which did not contribute much to the model performance were eliminated in the process of the so-called pruning based on the following generalized cross-validation error (GCV):

Formulas of the model evaluation criteria for estimating their predictive performance of the MARS algorithms are given below: 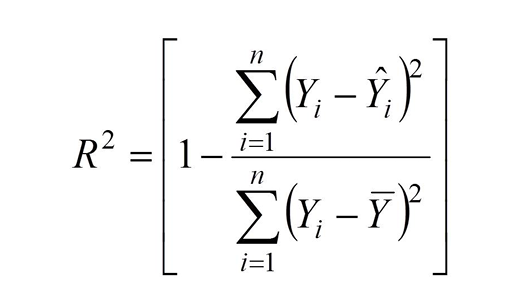 Relative importance estimates of the significant predictors in the MARS were made according to residual sum of squares (RSS) and GCV criteria. Also, nsubsets counts the number of the model subsets that contain the predictor, and are the subsets of terms produced by means of the pruning pass. RSS criterion first calculates the decrease in the RSS for each subset relative to the previous subset. GCV criterion is the same, but employing the GCV instead of the RSS.

Table I.- Results of regression analysis.

This is the initial documentation on predicting pasture revenue from systematic environmental factors with the use of MARS data mining algorithm that has no interaction effects. The MARS algorithm’s prediction equation showing predictors affecting pasture revenue as an indication of the profitability of small ruminant enterprises was written below with 0.968 R2, 0.928 Cross-validation R2, 97.7 GCV with the selected 17 terms. Highly significantly correlation of 0.984 was found between the real and the predicted pasture revenue values (P<0.01). Approximately all the variation in pasture revenue was explained by these 17 terms selected in the MARS solution. Insignificant contribution of birth type, sex, dam’s age, and lambing year to pasture revenue in the MARS was noted, which supported the explanations of Esenbuga and Dayioglu (2002) who reported the insignificant effect of the mentioned environmental factors on weights at increasing age of lambs. Also, the effect of genotype on pasture revenue was non-significant, meaning that the constructed MARS model could be used for both genotypes evaluated in the study. The MARS algorithm had greater predictive accuracy compared to the multiple regression analysis here, and presented the cut-off values in order to more easily comment on the achieved outputs with the aid of its maximum functions instead.

Table II.- The importance estimates of the influential predictors.

The variation in literature was attributable to genetic and non-genetic factors, and botanically various pastures, different statistical implementations etc. Howes et al. (2015) mentioned that ruminants in pasture grazing system yielded more desirable fatty acids. It is known that those fed with pasture based diets are more preferred by consumers, who are conscious of antioxidants of natural plants, to meet increasing demand for lamb meat in Turkey. Natural grazing pasture is a cheaper alternative to concentrate feed based diets (Smeti et al., 2014). More sophisticated studies on assessing the effect of concentrate and pasture based systems on fatty acid compositions of lamb meats are still required for the aim of describing optimal conditions.

The current work presented obvious evidence for superior performance of MARS algorithm in order to describe effectual factors on pasture revenue. In this respect, it was concluded that the MARS may be a valuable tool to ascertain optimum points of predictors affecting pasture revenue within the scope of improving lamb productivity.

Authors have declared no conflict of interest.