Abstract | Wheat (Triticum aestivum L.) is the basic required and stable food of every household from centuries. It has an important place in the world as it possesses high potential in nutrition point of view, gives good health, covers food security, etc. All the researchers are very much enthusiastic to know the growth and decline rates of trends in wheat production because of its high benefits. The main objectives of this study are to examine the change point and trend analysis for wheat production on the basis of time and spatial scale of major wheat producing states of India. This study has considered various prominent non-parametric methods i.e. Pettitt’s, Standard normal homogeneity (SNH) and Buishand’s range tests. The core purpose of these three techniques is to capture the mutation point in time series data connected to wheat production during the period 1980-2016. Consequently, Sen’s slope estimator has been used to measure the magnitude of the trend for wheat production and their significances examined through Mann Kendall (M-K) test. The analysis provided a clear idea about the trends of wheat production over India. The results exhibit that all the states showed the raising trends. The notable observation is that the trend of Madhya Pradesh got highest Sen’s slope estimator (i.e. 1541.999/year) in the second segmentation period. At present, the production of wheat is highly improved in Madhya Pradesh compared to other states from 2008. However, the production of wheat has been decreased in Uttar Pradesh compared to previous years but it holds the leading position in wheat production still in the country.

There are many agricultural productions which enhance the food strength of the individual. One among them is wheat which has its own impact on the human body. Wheat is the cheapest sources of major nutrients and ensuring food and nutrition security to the majority population of the nation. Wheat is the important staple food crop and cultivating mainly during Rabi season. Wheat was first grown in the “Karacadag Mountains” in South Eastern part of Turkey, it was generally called as Einkorn (T. monococcum) and is generally described as a diploid containing two sets of chromosomes. It is the largest produced agriculture product in the world with high proteins and calories. In the world’s wheat production, India stood second-largest producer after China. It occupies globally highest acreage of 220 million hectares with production of 763 million tonnes nearly. Whereas in India, the cultivation of area for wheat is increased up to 30.54 million hectors and production followed raising trend i.e., 94.57 million tonnes. India exporting wheat from decades to neighbouring parts of the country like South Asia, the Middle East and Eastern Africa. Now, India is between being a net exporter of wheat in some years and a net importer in others.

Over the past 10 years, global human wheat consumption has increased 90 MMT, while feed wheat usage has increased 16 MMT. Wheat is mainly utilized in the form of food such as bread, chapatti, porridge, flour, suji etc. The powerful health benefits of wheat includes its ability to control obesity, boost energy and boosts digestion, prevent asthma, inhibit type 2 diabetes, gallstones, improve metabolism, etc. Global food security is one of the major concerns in the era of twenty first century. Cereals play a vital role to compensate the current food security demands of mounting population worldwide and act as the source of nutrition and calorie intake. It is well known fact that usage and requirement of wheat is raising day by day due to which has good nutrients.

Understanding the fluctuations in wheat production is very essential for developing countries like India. It is required to enhance the level of wheat production in the face of the rapid growth of population and declining production of wheat. There is a need to determine monotonic trends of production and it helps to know the current situation of wheat production. A new attempt has been initiated to study the trend and change of wheat over India. In order to identify change point for study data, the powerful the non-parametric techniques such as Pettitt’s, SNH and Buishand’s range tests have been employed. Whereas the trends ratio measured through Sen’s slope estimator and their significances tested with M-K test.

Pettitt’s test: This test was introduced first by Pettitt in the early 1979’s. It is extensively adapted to examine the abrupt changes data (Verstraeten, 2006; Zhang and Lu, 2009; Dhorde and Zarenistanak, 2013). The test statistic is defined as:

Buishand’s range test: The Buishand’s Range test is named as Buishand test from 1982, and its test statistic calculated by Rb = maxSk – minSk / σ

Here, ‘p’ value is considered with a Monte Carlo simulation by ‘m’ replicates.

SNH test: The another popular test is SNH and its test statistic is denoted by Tk and it is defined as follows:

In the SNH test, the critical value is T= max Tk and p-value is considered with a Monte Carlo simulation by m replicates.

Generally, the magnitude of trend is measured in terms of ratio, this ratio can give an idea about trend i.e., either falling or rising or remaining relatively constant. With the help of ratio, it is possible to detect the poor or good signs of management. The non-parametric tests are simple and appropriate for non-normally distributed data. The M-K test plays a vital role to find out the significant nature of monotonic trends for time series data (Tabari et al., 2014; Mohammad et al., 2014; Jaiswal et al., 2015; Gavrilov et al., 2016; Khalili et al., 2015). The test statistic of M-K test is.

The Mean and Variance of S are E(s)=0 and 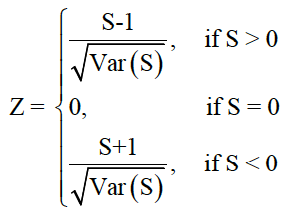 Sen’s slope estimator: Sen’s slope estimator is an adequate tool to determine the magnitude of the rend in time series related data (Guo and Xia, 2014; Talaee, 2014; Thenmozhi and Kottiswaran, 2016). In this technique, the slopes (Ti) of all data pairs are computed by:

yj and yk are data values at time j and k (j > k) respectively. The median of these N values of Ti is Sen’s slope estimator which has been noted below:

The sign of β value represents upward or downward trends of time series. If β value has positive sign, it indicates the upward trend otherwise the downward trend.

The current study, at the outset, the non-parametric tests Pettitt’s, SNH and Buishand’s range tests have been used to capture the change point for year wise wheat production from 1980-2016. The results of the change point are given in Table 2. and Figure 1. The results exhibit all the states captured significant change points in different time periods i.e.

*Indicates the change points are significant at 1% level.

From Table 3 and Figure 2 results, a notable point is observed that all states followed raising trends for wheat production in segmentation year wise. The identified all trends are statistically significant at 95% confidence by M-K test. From the Sen’s slope estimator analysis, it is observed that statistically significant highest growth i.e. 595.392/year at Uttar Pradesh and lowest growth i.e. 148.775/year at Madhya Pradesh in the first sub-time series respectively. According to India’s agriculture history of Madhya Pradesh, the present scenario of wheat area is highly improved around 18.75% and production is identified as 16.32 million tonnes compares to previous years. This surge production of wheat began in the year 2008 in Madhya Pradesh. The growth makes the state as one of the best outperformed wheat producing state in the country from the year 2008. The unprecedented changes taken in Madhya Pradesh due to expansion of cultivation of area, adoption of high-yielding varieties, enterprise of the farmers themselves etc. Whereas in Uttar Pradesh, the production wheat has been decreased nearly 1.4 million tonnes in the last decade and however still the state of Uttar Pradesh hold the leading wheat producer in the country (Sendhil et al., 2019). From the trend analysis on the basis of second sub-time series (see Table 3), the significant average growth rates of maximum and minimum trends are 1541.999/year and 304.797/year followed by Madhya Pradesh and Uttar Pradesh. The whole-time series results shown the highest upward and lowest upward significant trend are captured in the states of Uttar Pradesh (471.003/year) and Punjab (231.021/year). So, Madhya Pradesh showing the highest trend ratio compared to Uttar Pradesh in second sub-time series. From the above analysis and discussion, it is clear that the Sen’s slope estimator analysis has given an accurate results to the researchers.

The current study emphasizes on variability and long-term trends of wheat production of major wheat producing states over India. In this study, various nonparametric methods are adapted to examine the abrupt change point followed by trend analysis. The change point analysis captured significant change points from 1995 to 2005 and changes caused by various factors such as climatic conditions, the rapid growth of industrialization, commercial activities of human beings, etc. The trend analysis results revealed that all the states show the upward trend and it indicates that on average the production of wheat is improved over India. The important observation from the trend analysis is the magnitude of trends for all states are declined in second sub-time series except Madhya Pradesh. The highest growth and lowest growth rates of wheat production are identified as 1541.999/year in Madhya Pradesh and 117.682/year in Panjab.