YL, ZAQ and ZHY designed the experiment and performed experimental work. SJ, WM and WCA analyzed the data and helped perform the analysis. JHB and LM contributed reagents and materials, and wrote the manuscript.

In developed and developing countries, fish constitutes an important food source due to its rich nutrient content. Consumers demand healthy, high-quality, natural, and fresh fish products. Rainbow trout (Oncorhynchus mykiss), as an important worldwide cold water fish species (Rezaei and Hosseini, 2008), is one of the main sources of protein, minerals, vitamins, and n-3 long-chain polyunsaturated fatty acids including eicosapentaenoic acid (EPA) and docosahexaenoic acid (DHA) (Abedi and Sahari, 2014; Woynarovich et al., 2011). Its aquaculture production was more than 760,000 tones throughout the world with a total value of near 3,000,000 USD (Mirghaed et al., 2018). The quality of the products from fish is determined mainly by the nutritional value and sensory attributes of the flesh (Grigorakis, 2007); these aspects are influenced, not only among species but also within species due to several factors. Some of these factors are the age and size of the fish, the season of the year, the quality of water, the composition of diet, the feeding regime and by the stress response produced during the pre-slaughter period (Shearer, 2001; Poli, 2009; Suárez et al., 2014; Bermejo-Poza et al., 2017). A variety of feed additives are used to improve performance in aquaculture, to protect rainbow trout health and to improve the quantity and quality of products positively, such as plant oil (Yildiz et al., 2015), vitamin E (Kamireddy et al., 2011), zinc (Wu et al., 2015), selenium yeast (Wang et al., 2018), astaxanthin and canthaxanthin (Cui et al., 2009).

All fish in each cage were weighed and counted at the beginning and at the end of the experiment. Dead fish were removed and recorded daily. At the end, twelve fish from each cage were randomly collected and were anesthetized with 200 mg L-1 MS-222. Six fish were used for the analysis of muscle composition, and six fish were used to obtain the weights of whole body, viscera and liver. All samples were stored at -80oC before analysis. 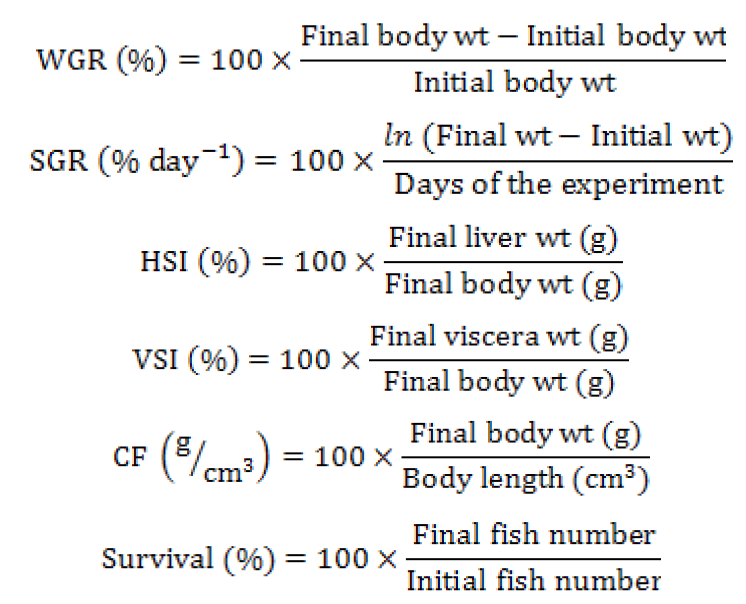 Chemical compositions of diets and muscle including lipid, protein, moisture and ash were analyzed according to standard methods (AOAC, 2005). All analyses were performed in five replicates.

The amino acid compositions of ingredients were determined in triplicate with an automatic amino acid analyzer (LKB Biochrom Ltd., Cambridge, UK). Total lipid of muscle samples were extracted using chloroform: methanol (2:1, v/v) according to the method of Folch et al. (1957). The saponifiable lipids were converted to methyl esters by using the standard boron tri-fluoride-methanol method (Morrison and Smith, 1964). Fatty acids methyl esters (FAME) were analysed on an Agilent 6890 gas chromatograph (Agilent Technologies, Santa Clara, CA, USA), equipped with a flame ionization detector (FID) and a SP-2560 fused silica capillary column (100 m long, 0.25 mm i.d. and 0.20 μm thick). Injector and detector temperatures were 270 and 280oC, respectively. Column temperature was held at 120oC for 5 min then programmed to increase at 3oC min-1 up to 240oC, where it was maintained for 20 min. Carrier gas was helium (2 mL min-1), and the split ratio was 30:1. Identification of fatty acids was carried out by comparing the sample FAME peak relative retention times with Sigma-Aldrich (St. Louis, MO, USA) standards. The individual FAME was identified by comparing the retention times of the authentic standard mixtures. The amount of each fatty acid was calculated using the peak area normalization method as a relative per cent value to the total fatty acids.

Data were expressed as means ± standard deviation (SD). All statistical evaluations were analyzed using one-way analysis of variance (ANOVA) by the software SPSS 11.0 (SPSS Inc., Chicago, IL, USA) for Windows. Prior to the statistical tests, data were examined for normality and homogeneity of variances. Differences between the means were tested by Duncan’ s multiple-range tests. The level of significance was set at p<0.05.

The effects of the dietary aqueous extract from EUO on the amino acid profile in the muscle of rainbow trout are shown in Table IV. These results indicated that most of the amino acid concentrations in muscle were not significantly affected by dietary EUO levels compared with control group (EUO-0) (p >0.05), except for Val, Phe, Gly, Ala and DAA (p <0.05). Fish fed EUO-5 diet had lower Val

In the present study, no effect of dietary EUO was observed in muscle moisture, crude protein, and crude ash contents of rainbow trout, as reported for C. autatus gibelio (Meng et al., 2007), L. vannamei (Liu, 2013), C. idella (Sun et al., 2017a, b). The lipid storage is one of the key factors in determining skeletal muscle quality. In previous studies, Sun et al. (2018) found that dietary EUO could decreased muscle lipid content of C. idella. However, the other studies by Sun et al. (2017a, b) indicated that there was no significant difference in muscle lipid content of C. idella fed EUO-supplemented diet and control diet, which was similar to the studies of L. vannamei (Liu, 2013), C. autatus gibelio (Shi et al., 2008), Angulla japonica (Tanimoto et al., 1993a). At present, the result showed that dietary EUO significantly increased the lipid content in muscle. The result was in line with previous studies in some domestic animals such as pig (Wang et al., 2007), sheep (Yang et al., 2017). It is probably due to the regulation of lipid metabolism and distribution by EUO, which could lower serum lipid levels and increase the muscle crude lipid contents (Yang et al., 2017).

Amino acids are known as anabolic factors, which induce protein gain by stimulating protein synthesis while inhibiting proteolysis (Li et al., 2007; Métayer et al., 2008). Sun et al. (2017a) found that the supplementation of EUO into diet showed significantly improved the threonine (Thr), valine (Val), isoleucine (Ile), leucine (Leu), lysine (Lys), arginine (Arg), proline (Pro), total amino acids (TAA) level in muscle of C. idella. The study of Sun et al. (2018) reported that dietary EUO significantly promoted the muscle Arg, aspartic acid (Asp), tyrosine (Tyr), Pro, total nonessential amino acids (TNEAA), delicious amino acids (DAA), TAA levels in C. idella. In the study by Wang et al. (2012), dietary EUO promoted the generation of serine (Ser), glutamic acid (Glu) and lys in the muscle of chickens. The present results indicated that phenylalanine (Phe), glycine (Gly), alanine (Ala), DAA in muscle were increased by the supplementation of high levels of EUO. The higher EAA content in muscle means better nutritional value for human. The fresh taste of meat is fundamentally influenced by the content of DAA.Thus it can be seen that dietary EUO can improve the contents of part EAA and DAA in muscle of animals. This may be due to the chlorogenic acid and geniposidic acid, which are the most important bioactive compounds in EU. Sun et al. (2017a) showed that the supplementation of 400-800 mg/kg chlorogenic acid significantly increased the contents of TEAA and TAA in muscle of grass carp. Zheng et al. (2014) found that dietary chlorogenic acid increased serum Gly level and liver glutathione level of rat. Sun et al. (2018) reported that TNEAA, TAA, DAA in muscle of grass carp were increased by the supplementation of high levels of geniposidic acid. However, we do not know the mechanism of the increased amino acids by EUO or active ingredients of EUO.

Fatty acid composition is an important characteristic of lipid and oil. In this study, 22:1n-9 content in muscle examined are positively correlated to high level of EUO in diet. This is most likely because of EUO contains 22:1n-9 (Liu, 2013), which were accumulated in muscle of fish fed EUO diets. Our results showed that 18:3n-6 content in muscle of fish fed EUO diet was lower than that of fish fed control diet, especial for EUO-5 and EUO-40 groups. Similarly, 18:2n-6 content in muscle was decreased with the increasing of EUO level in diets. Contrary to 18:2n-6 and 18:3n-6, 20:4n-6 content in muscle of EUO-10 and EUO-40 groups examined were slightly above that of control group. It is possible that rainbow trout has capacity to convert 18:2n-6 to 20:4n-6 (from 18:2n-6 to 18:3n-6, and eventually to 20:4n-6) (Thanuthong et al., 2011). At present, there has been no study on the effect of EUO on muscle fatty acid composition of aquatic animal. Results of this report showed that muscle 22:5n-3 and 22:6n-3 contents were significantly increased by the supplementation of EUO-40 in diet. This may be due to the chlorogenic acid in EUO. Kühn et al. (2017) found that there was a tendency to increase C22:6n-3 levels in the liver of Atlantic salmon fed chlorogenic acid diets. The chlorogenic acid is an ester of caffeic acid and quinic acid present in coffee and various other plants, such as EUO, fruits, vegetables, black teas, soybeans and wheat (Sun et al., 2017b). Chlorogenic acid inclusion seems to affect lipid metabolism. The antioxidant capacity of Chlorogenic acid may delay the oxidation of lipids. And it not only promotes β-oxidation of lipids but also induces n-3 LC-PUFA syntheses via transcriptional control of fatty acid elongases and desaturases through increased the expression of the perxisome proliferator-acivated receptor ɑ (Rakhshandehroo et al., 2007; Kühn et al., 2017). However, it did not showed dose-dependent between chlorogenic acid addition level and muscle n-3 LC-PUFA level in this study.

In conclusion, the present study demonstrates that the supplementation of EUO could improve flesh quality without negative effects on growth performance of juvenile rainbow trout, Oncorhynchus mykiss. The supplemental level of EUO was estimate to be a 40.00 g kg-1 diet.

This research was supported by grants from Breeding and Reproduction in The Plateau Mountainous Region, Ministry of Education (Guizhou University) (No. GYSD-K-2018-04), the Science and Technology Project of Guizhou Province (No. 20162502, No. 20172532), Guizhou province science and technology platform and talent team plans (No. 20185253), the China Agriculture Research System (No. CARS-46).

The authors declare no conflict of interest.