Dali Wang and Yujing Zhu contributed equally to the paper.

Landslide and debris flows, a serious geological disaster, are common at the edge of the Tibetan Plateau, and damage the surface vegetation. Like other natural disasters, landslide and debris flows cause a shift in local ecological conditions, which can have profound impacts on the habitat of non-human primates. This study investigated the characteristics of surface vegetation found within the debris field of a landslide and debris flow that occurred in 2008 at Gehuaqing in Baimaxueshan Nature Reserve ten years later. We calculated the surface area of the debris field to be 71672.96 m2, affecting around 312500 m2 of the known home range of a resident Yunnan snub-nosed monkey group. A field survey was conducted to sample the vegetation within the area of the landslide and debris flow after it had been allowed to grow for ten years. In total, 27 plant species were observed within the debris field, all classified as either shrubs or herbaceous plants. Gnaphalium hypoleucum had the highest importance value of the herbs (27.48%), while Leycesteria formosa had the highest importance value of the shrubs (17.33%). The Shannon-Wiener diversity index was significantly higher in the lower section and the Bray-Curtis distance was significantly lower, suggesting vegetation recovery has progressed faster on the lower end of the debris field. The speed of restoration within the landslide and debris flow area is important for the protection of Yunnan snub-nosed monkeys living at Gehuaqing. A reasonable plan for vegetation restoration according to the composition of the surrounding community could mitigate population reductions in the monkeys and other local wildlife.

Copyright 2022 by the authors. Licensee Zoological Society of Pakistan.

This article is an open access article distributed under the terms and conditions of the Creative Commons Attribution (CC BY) license (https://creativecommons.org/licenses/by/4.0/).

Landslide and debris flows, a common geological disaster, dump large amounts of mud and rocks onto lower-lying areas (Blahut et al., 2010). They can permanently change landscapes, for instance by flattening mountains (Wang et al., 2005). The landscape of Yunnan is comprised of the southeast edge of the Tibetan Plateau. Due to its unique geographic structure and complex local geologic processes, the area has a long history of landslide and debris flows (Chen et al., 2016). According to the National Bureau of Statistics of the People’s Republic of China, from 2010-2017 natural disasters such as landslide and debris flows and mudslides in Yunnan Province affected 1777.5 thousand hectares, impacted 135.19 million people, killed 2,056 people and caused 165.79 billion RMB of direct economic losses (http://data.stats.gov.cn/easyquery. htm?cn=E0103). Due to Yunnan Province has a high incidence of landslide and debris flows and mudslides, making it a natural laboratory for studying vegetation recovery after these destructive events.

Yunnan is also one of the most biodiverse regions in China, with a variety of ecosystems characteristic of the province (Pu et al., 2007). Baimaxueshan Nature Reserve is located in Yunnan Province, and this reserve is an important habitat for Yunnan snub-nosed monkeys (Rhinopithecus bieti), an endangered species (Ren et al., 2016; Xia et al., 2020), and about 407 individuals of Yunnan snub-nosed monkeys inhabited Gehuaqing in 2007 (Grueter et al., 2017). Endemic to China, this primate lives at high altitudes under difficult, strongly seasonal conditions (Long et al., 1994; Li et al., 2006). R. bieti occupy a certain area for a long time to ensure their daily activities, including foraging, breeding, concealment and rearing (Li et al., 2010a). If enough habitat is destroyed within their home range, such that they can no longer survive there, R. bieti groups will migrate to seek out other suitable habitat (Li et al., 2010b). The destruction characteristic of landslide and debris flows can increase habitat fragmentation within the monkeys’ territory. The total geographic distribution of R. bieti is restricted to a long and narrow section of the Hengduan Mountains, between the Jinsha River and the Lancang River, and during 1994 and 2016 population surveys estimated that only 3,000 individuals remain across 17 groups (Zhao et al., 2019; Xia et al., 2020). Despite recovery in the total population since the millennium, the long-term survival of R. bieti is still at risk due to forest fragmentation and anthropogenic disturbance (Zhao et al., 2019). The declining habitat quality and resource availability of R. bieti also have negative effects on the long-term viability of other primate species (Wahungu et al., 2005; Arroyo-Rodriguez et al., 2014), increasing the risk of global primate extinction (Li et al., 2018).

The effects of other natural disasters on animals have been studied both in China and abroad; for instance, the impact of snowstorms on R. bieti (Li et al., 2012) and changes to wildlife behavior brought on by earthquakes (Ge et al., 2011). However, the interaction between landslide and debris flows and primate habitat quality has not yet been explored, and this phenomenon could affect the protection of species such as R. bieti. In this study, we analyzed the composition of vegetation re-growing over a landslide and debris flow that occurred at Gehuaqing in 2008. We examined site characteristics in 2018, ten years after the disaster, and calculated several measures of species diversity with the goal of helping administrator to build a reasonable vegetation restoration plan in Baimaxueshan Nature Reserve.

The study site is located at Gehuaqing in the southernmost part of Baimaxueshan Nature Reserve (27° 34′N, 99° 17′E), in Yunnan Province (Grueter et al., 2017). The study site belongs to the Hengduan Mountains, a high-altitude region without basins or valley plains.

Yunnan snub-nosed monkeys living at Gehuaqing numbered about 407 in 2007 (Grueter et al., 2017). Their home range occurs entirely within the reserve, and the edge of their territory is less than 1 km away from the nearest human dwellings (Grueter et al., 2008). In 2008, a landslide and debris flow occurred within the monkey group’s range. We investigated the range of landslide and debris flow in 2008, and we also surveyed natural recovery at the site of the slide in 2018.

We conducted a quadrat survey of vegetation within the debris field in order to investigate its natural recovery after ten years. In order to compare differences in the distribution of vegetation in different parts of the landslide and debris flow’s debris field, we divided it into an upper and a lower section. ArcGIS 10.2 was used to randomly divide the study area into 10m×10m grids, randomly select the grids of 20 points in the study area as survey zones (Fig. 1), and record all species in each sample. Species identification was done using Flora of Yunnan (Wu, 2006). We also calculated relative density, coverage and frequency for each quadrat.

The Bray-Curtis distance index is calculated as:

Where xi is the importance value of each species, and j and k are the number of quadrats. 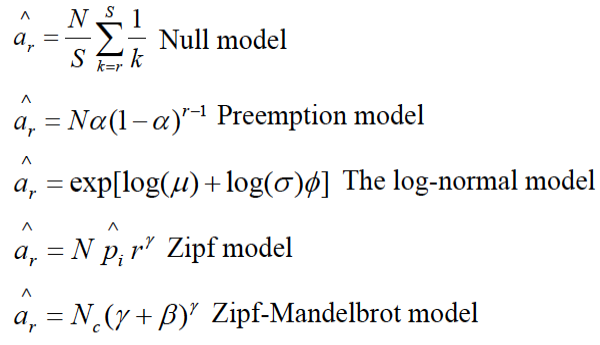 T-tests were used to compare the Shannon-Wiener diversity index, the Bray-Curtis distance between the upper and lower sections of the landslide and debris flow area. All statistical analyses were two-tailed and the significant alpha level was set at 0.05. SPSS 19.0 and R 3.6.1 were used for the statistical analyses, and ArcGIS 10.2 was used for drawing maps and graphs.

Distribution characteristics of landslide and debris flow at Gehuaqing in 2008

According to the Chinese geographical classification of animals, there are 9 orders, 23 families, 70 genera and 100 species of mammals in the reserve, accounting for 16.8% of the total mammal species in China and 33.3% in Yunnan. 246 species of birds have also been spotted in the reserve, belonging to 17 orders, 43 families and 4 subfamilies, accounting for 30.7% of the recorded bird species in Yunnan province (Li, 2007).

Table I. The distribution characteristics of landslide and debris flow.

Influence of landslide and debris flow for monkeys’ home range

Species composition for natural recovery of vegetation in the debris field

With respect to the recovery of vegetation in the upper vs. the lower section of the landslide and debris flow area, the Shannon-Wiener diversity index had higher values for the lower section of the debris field (Fig. 3). This indicated greater diversity in the lower section. During the collection of field samples, numerous tree seedlings were observed in the shrub layer, suggesting that the community is actively regenerating through the growth of these seedlings. The Bray-Curtis index reflects the dissimilarity in species composition between patches (Fig. 3). It was significantly smaller in the lower section than in the upper, indicating that patches there have become more similar to each other as the vegetation has regrown.

The ranked abundance distribution model plots in descending order. Five models commonly used in R were chosen, and the best-fit model was selected. For the upper section of the landslide and debris flow, the AIC value of preemption was the lowest, indicating that the model best fit the data. In contrast, for the lower section of the landslide and debris flow, Mandelbrot is the optimal model. Both models indicate the same general trend of increased vegetation recovery in the lower section of the debris field (Fig. 4).

Impact of landslide and debris flows for Yunnan snub-nosed monkeys

Natural recovery of vegetation in the landslide and debris flows field

The progress of vegetation regrowth within the debris field shows that though there is the potential to restore native plant cover, natural recovery is limited. After ten years of undisturbed regrowth, the landslide and debris flow is dominated by a shrubby-herbaceous community. Under natural restoration conditions, the sequence of community succession is typically annuals, perennials, short root clusters and subshrubs (Kou et al., 2016). Trees, in contrast, usually take decades or even hundreds of years to recover after a landslide and debris flow or a mudslide (Salmo et al., 2013). In this study, we found that although the species list at the bottom and the top of the landslide and debris flow area were different, comparisons of the Shannon-Wiener diversity index between the upper and lower region were not significant, and species composition was only slightly different. Active human intervention in an ecosystem after a natural disaster can help to rebuild native communities faster (Finnegan et al., 2019). Baimaxueshan is located at the southeast edge of the Tibetan Plateau, where has undergone an uplift since the early Pleistocene. The climate is also mild and humid, providing favorable terrain and climate conditions for landslide and debris flows (Chen et al., 2005). Without human intervention and management, natural vegetation may be difficult to recover, especially in the initial stage of restoration (Chen et al., 2016).

In summary, the speed of ecological restoration in the area affected by the landslide and debris flow at Gehuaqing has a profound impact on the local R. bieti population. Forest fragmentation spatially isolates subpopulations and impedes gene flow. In addition, fragmentation can reduce the availability of large food patches by changing tree species composition and diversity. Vegetation restoration may not happen quickly enough under natural conditions to prevent negative impacts on wildlife vegetation. From 2008 to 2018, no trees have grown to more than 3m tall in the debris field, reflecting the slow pace of recolonization by ecologically important species. A reasonable vegetation restoration plan, based on the community characteristics of the area surrounding the damage and the criteria for suitable monkey habitat, can help improve habitat quality and mitigate losses of Yunnan snub-nosed monkeys as well as other wildlife within the reserve.

We are grateful to our field assistants Nisha A, Shunkai Feng, Xuewen Feng. We thank Baimaxueshan Nature Reserve for our work permit. We also thank that Ali Krtzon revise English for this manuscript.

Financial support was provided by National Natural Science Foundation of China (No. 32070454), the Second Tibetan Plateau Scientific Expedition and Research Program (No. 2019QZKK0501), the Biodiversity Survey and Assessment Project of the Ministry of Ecology and Environment, China (No. 2019HJ2096001006), the Sichuan Science and Technology Program (No. 2021JDRC0024).

This field experiments were approved by State Forestry Administration of China (the Second National Survey on Terrestrial Wildlife Resources in China).

The authors have declared no conflict of interest.